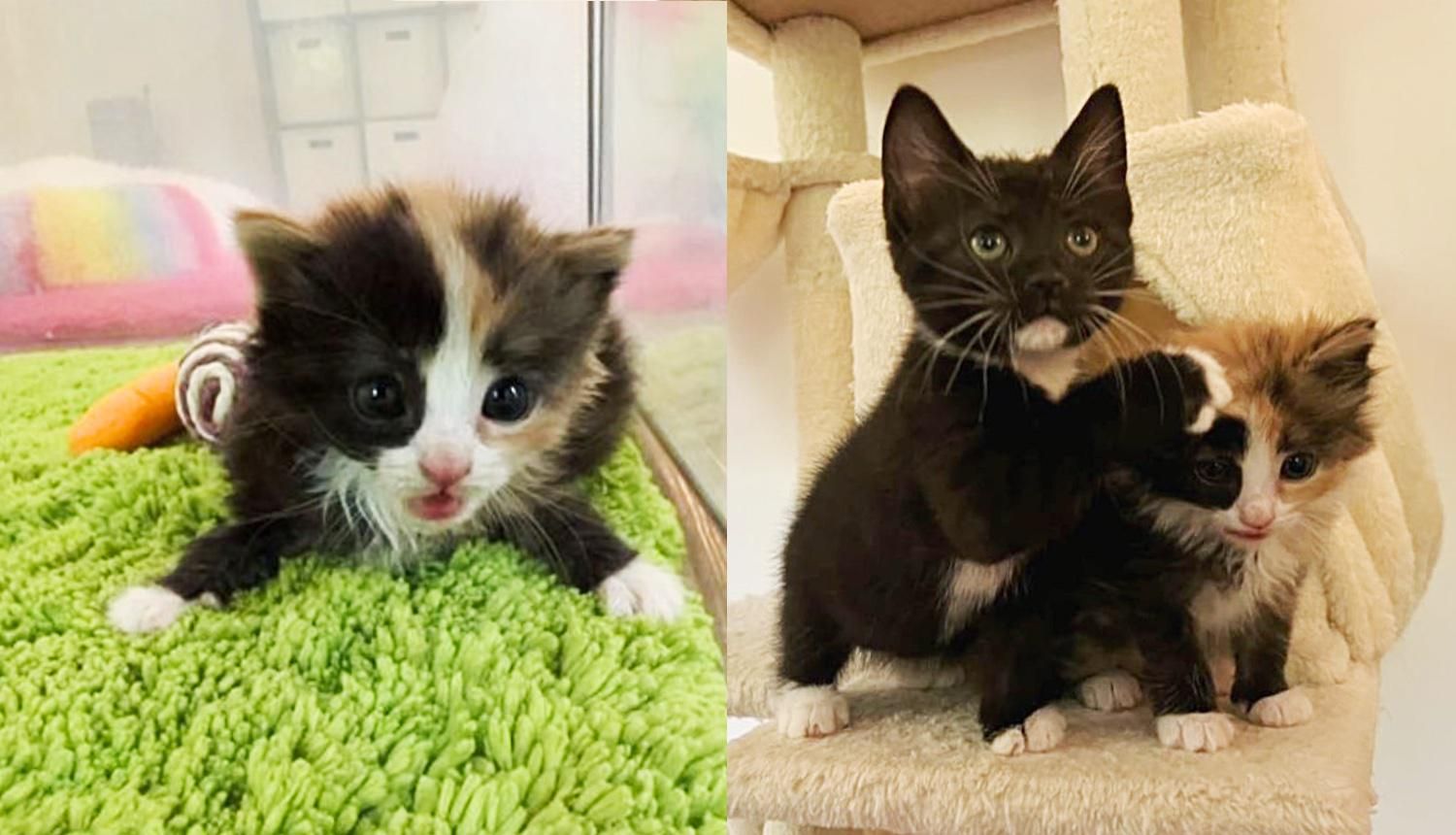 A tiny kitten who had a lot to say, came up to another kitten one day and decided they would never be apart.

A calico kitten was brought into an animal shelter (in North Carolina) with her siblings. She was very small, behind in her milestones, and the only one that still needed round-the-clock bottle feedings.

“Another rescue took her siblings but did not have a bottle feeder. So we were asked about taking her, and we were able to go pick her up immediately,” Sarah Kelly, the founder of Murphy’s Law Animal Rescue, told Love Meow.

The kitten named Cinco (Cici)—as she arrived on Cinco de Mayo—was just palm-sized and had a lot of growing to do. “She was so grateful to be taken in, and right away was vocal in letting us know her desire to be loved and fed.”

For the first time in her life, Cici went to sleep with a full belly, and had a warm, comfy bed to nestle in. Every time Sarah came in with a bottle, she would cry at the top of her lungs and reach up to her foster mom (on her tiptoes) for head scritches.

Her loud meows morphed into tiny squeaks as she was pleased with a full belly. She’d happily lie on her soft blanket and knead away in pure bliss.

Over the next few days, Cici grew by leaps and bounds and her personality fully emerged. She continued to be a little chatterbox, telling her foster mom all the tales of her day while she catered to her every whim.

“She was so confident and independent, like a stoic little princess always doing her own thing—at her own, very dainty, cautious speed.”

When Cici was medically clear to meet other kittens, she moved into a spacious room with a few other foster friends. Among them was a sweet tuxedo named Gaia who walked around with a lofty proud gait, without a care in the world.

Just like Cici, the black and white kitten came to the rescue as a singleton, and was thrilled to have other cats her age to play and tumble with.

The calico sauntered up to her and decided to snuggle, as if they had always been littermates. Despite having other feline buddies to play with, Cici preferred tagging along with Gaia, staying within eye-sight of each other.

Watch Cici the little chatterbox in this cute video:

“She instantly bonded with Gaia! They would snuggle and play together constantly,” Sarah told Love Meow.

When other kittens were busy getting their zoomies in, making a ruckus, Cici would come running to her foster mom at her mere presence.

When Cici was big enough for adoption, she made it clear that she and her best friend were a packaged deal.

Three days ago, they had their dream come true when a wonderful couple came to visit them. “They were adopted, together! We could not be happier they found the perfect family and forever home. These two girls are as sweet as their future is bright.”

Cici and Gaia, now renamed Cookie, will continue their adventures together and fill their new home with endless purrs and joy.

Related story: Orphan Kitten Sneaks into a Nest of Small Kittens and Insists on Being Part of Their Family

These three kittens were found in a tractor trailer by kind people who turned their lives around. Murphy’s Law Animal Rescue It was nothing short…

A cat came out of her shell knowing her kittens were in great hands. She turned into a fluffy big hugger. Estee the cat and…

A kitten who was found at an auto shop, has a lot of “opinions” to tell throughout her rescue journey. Lexus the kittenNewborn Kitten Rescue…

A cat found a comfy place after roaming outside for years. She had two kittens that no one expected. Mulan the catChatons Orphelins Montreal A…