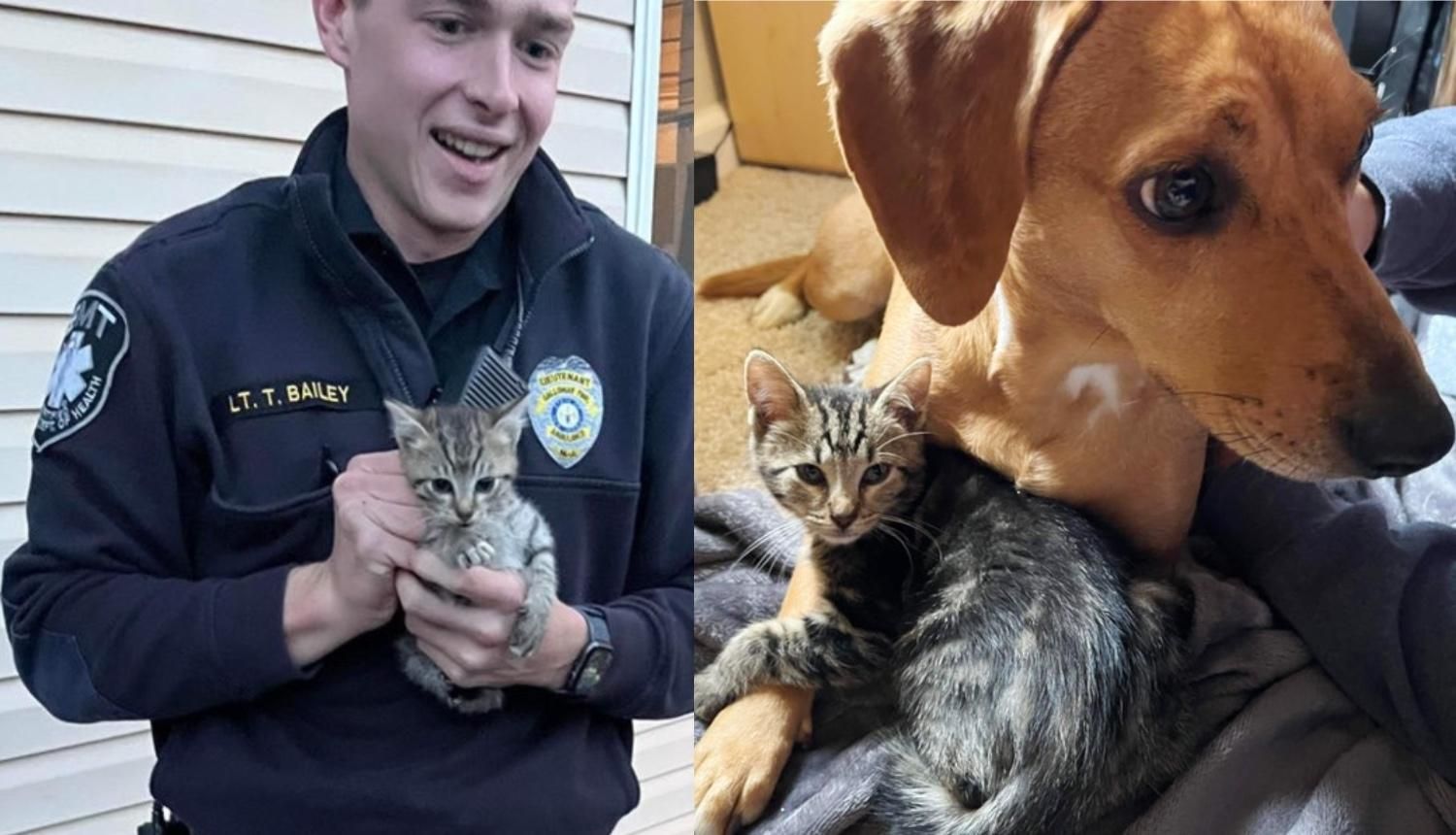 A man spotted two kittens running around the building and ended up caring for them with the help of a dog.

Tom, an EMT, was on his shift at Galloway Township Ambulance Squad in New Jersey, when he spotted two tiny dots (that looked like kittens) on camera, chasing each other around the building.

As an animal lover, Tom made a mental note to keep an eye out for the kittens. The next morning, when his partner went to start her car, he wanted to check to make sure that no animals were in there.

When he popped the hood open, lo and behold, a kitten was sitting on top of the car engine. Within seconds, the little one turned around and was about to flee into the engine bay.

Tom quickly grabbed the kitten before he was able to dive in, but the tabby was holding onto the car for dear life.

Tom managed to pry him off and bring him inside, getting a few scratches in the process. They waited around until they located the second kitten and got him out of the car, this time, with the help of a heavy duty glove.

They brought the kittens home and gave them a comfortable space and plenty of soft things to snuggle with.


Tom, an EMT, rescued the kittens. He and his girlfriend, Emily, took them in to fosterKizzy’s Place

The tabbies whom they named Buddy and Wally, quickly came out of their shells when they realized they were safe.

Emily reached out to her rescue and offered to foster the kittens until they were ready for adoption. Her cat-friendly dog Arya heard about the newcomers, and a meet-and-greet was in order.


Buddy and Wally the kittensKizzy’s Place

Wally was instantly smitten with Arya when they were introduced, and just wanted to be loved on by his canine friend. He rubbed his face all over her and followed her around the room.

“He went out of his way to meet Arya.”

“Buddy is still a bit shy — a perfect counterpart to bold and outgoing Wally. They are obsessed with food and do not like sharing their bowl.”


The bonded brothers are loving their VIP life with their foster parents, Tom and EmilyKizzy’s Place

The feline brothers enjoy hanging out with Arya the dog and snuggling with their foster parents on their lap.

They are so happy to be away from the elements of the outdoors and no longer have to worry about food and shelter.


They enjoy the company of their canine friend AryaKizzy’s Place

Emily and Tom adore the tabby boys and are glad that they were saved just in time.

The couple advocate the importance of “checking under the hood of your car in the morning, especially after cold nights.”

The bonded pair still have a lot of growing to do until they are big enough for adoption (around early December). Now, they have loving foster parents to cater to their every whim and a canine kitten-sitter to keep them company.

Share this story with your friends. More on Buddy and Wally and Kizzy’s Place on Instagram @kizzysplaceinc.

Related story: Lonesome Kitten Comes Running to a Litter of Four and Decides He’ll Be Their New Brother

Twin kittens who were found on the streets, learned to be brave with the help of family cats. Big and LittleErica @phillykittylady_fosters Two tabby kittens…

Two kitten were in a backyard squeaking and waiting for help. Now, they have someone to hold onto every day. Squeak and Adele the snuggly…

A cat arrived at someone’s home for food and decided to lead them to her kittens one day. Calie the cat mom and her kittensChatons…