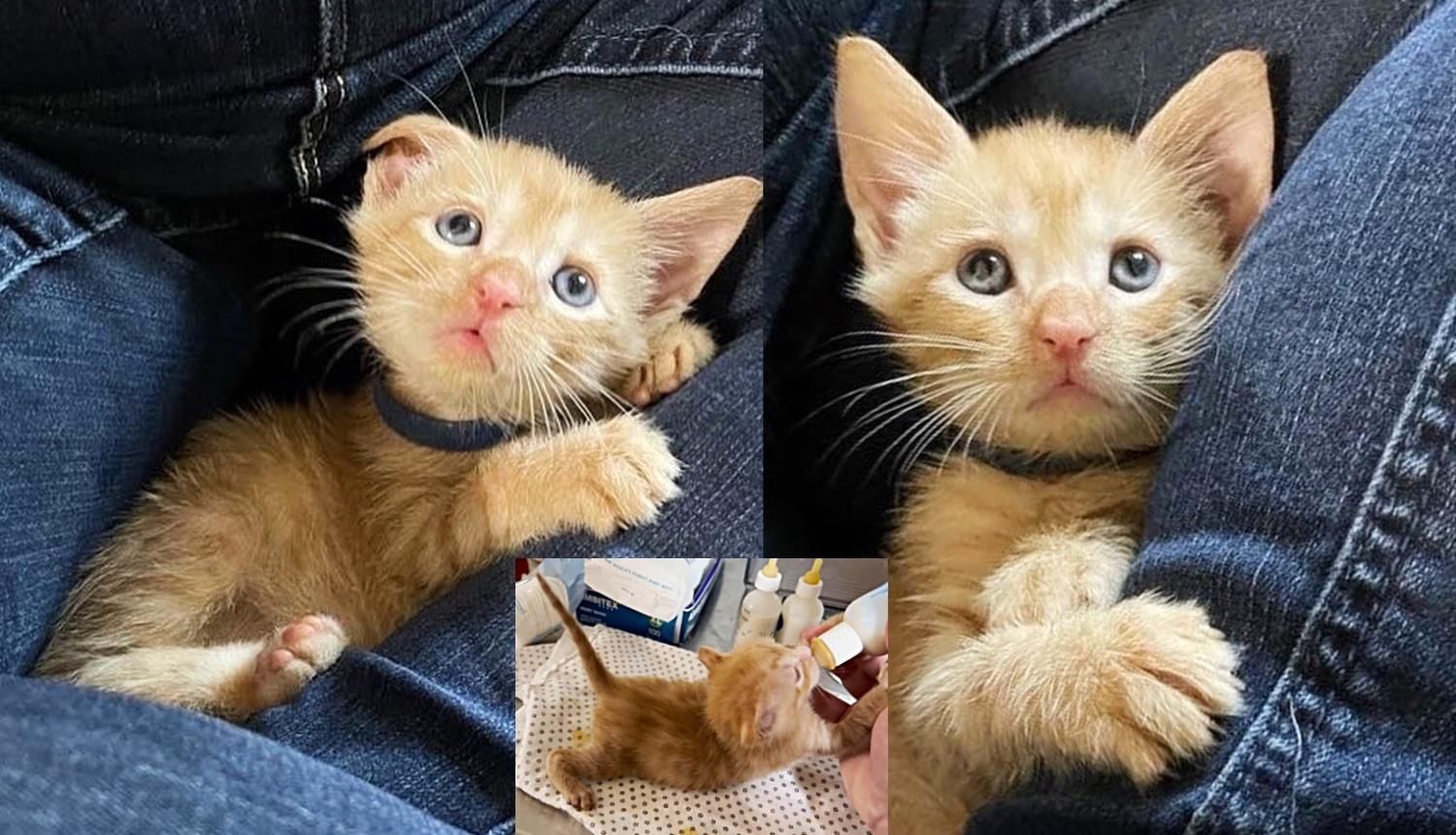 A kitten with a “tail meter” curls up on the person who feeds him after he was found outside with his six littermates.

Oboe, an orange tabby kitten, was about 10 days old when he was found abandoned outside along with his six siblings. They were covered in dirt and many came with eye infections.

Jen Mack, founder of Kitkat Playroom, took them in and immediately started round-the-clock care on them. After a couple of days, the litter perked up as they began to accept kitten formula.

“Once Oboe started eating from the bottle, I felt relieved and believed he was safe,” Jen shared with Love Meow.


He was found abandoned outside with his 6 siblingsKitkatPlayroom

Oboe was tiny when he first arrived, but he harnessed a mighty will to live. From the beginning, he was determined to grow big and strong.

“When Oboe was a tiny baby, he would start nursing from the bottle with his tail straight up to the ceiling. As he filled up, his ‘tail meter’ would slowly go down. He has always loved food.”


Oboe’s tail is his fill meter. It starts straight up on empty and slowly goes down as he fills upKitkatPlayroom

Oboe quickly surpassed all his littermates in weight and became the biggest kitten. “I called him the Chunker. He’d want seconds and then thirds of the bottle.”

When Jen came into the room to feed seven hungry mouths, Oboe made himself stand out as he vied to be the first in line to be fed. “He had this deep, loud powerful meow that didn’t sound like a tiny two week old kitten.”

Oboe always eats to his heart’s content until his belly is filled to the brim. Not only has he grown to be the biggest in his litter, but also the strongest and toughest of all.

He has a lot of strength. While other kittens use their teddy bear to snuggle and keep them company, Oboe likes to wrestle with it and drag it around, showing off his kitty prowess.

“As a baby, he pulled a teddy bear around the room with his teeth. He loves to climb your back and perch on your shoulder. Oboe is the clamberiest climber who ever climbed.”

Watch Oboe the kitten and his “tail meter” in this cute video:

After a long day of busy kitty activities, Oboe comes running to his people for his favorite thing in the world, snuggles.

“He adores laying in a lap getting belly rubs. He’s got a rumbly loud purr that vibrates your whole lap,” Jen shared with Love Meow.

Oboe is brave and strong-willed when he sets his mind to do something. He is especially persuasive when he looks at his people with those big doe eyes. Needless, he always gets what he wants.

“Like most bottle babies, Oboe most certainly loves his humans, and he will love to get plenty of lap and snuggle time from you,” Jen added.

“When he’s not being fantastically entertaining with his bouncy antics, he likes to chase things that clatter and jingle, or chase his littermates for a good wrestling match.”

Oboe and his siblings are ready to find their forever homes. He is thriving as the leader of the clowder and the one that his siblings look up to.

He continues to be the most rambunctious of the bunch and the snuggliest lap kitty.

Related story: Kitten Runs into a Backyard for a Snack but Lands Himself the Perfect Happily Ever After Instead

A cat lived outside and slept on leaves until he ran into people that changed his life. Morpheus the catLittle Wanderers NYC Morpheus, a long-haired…