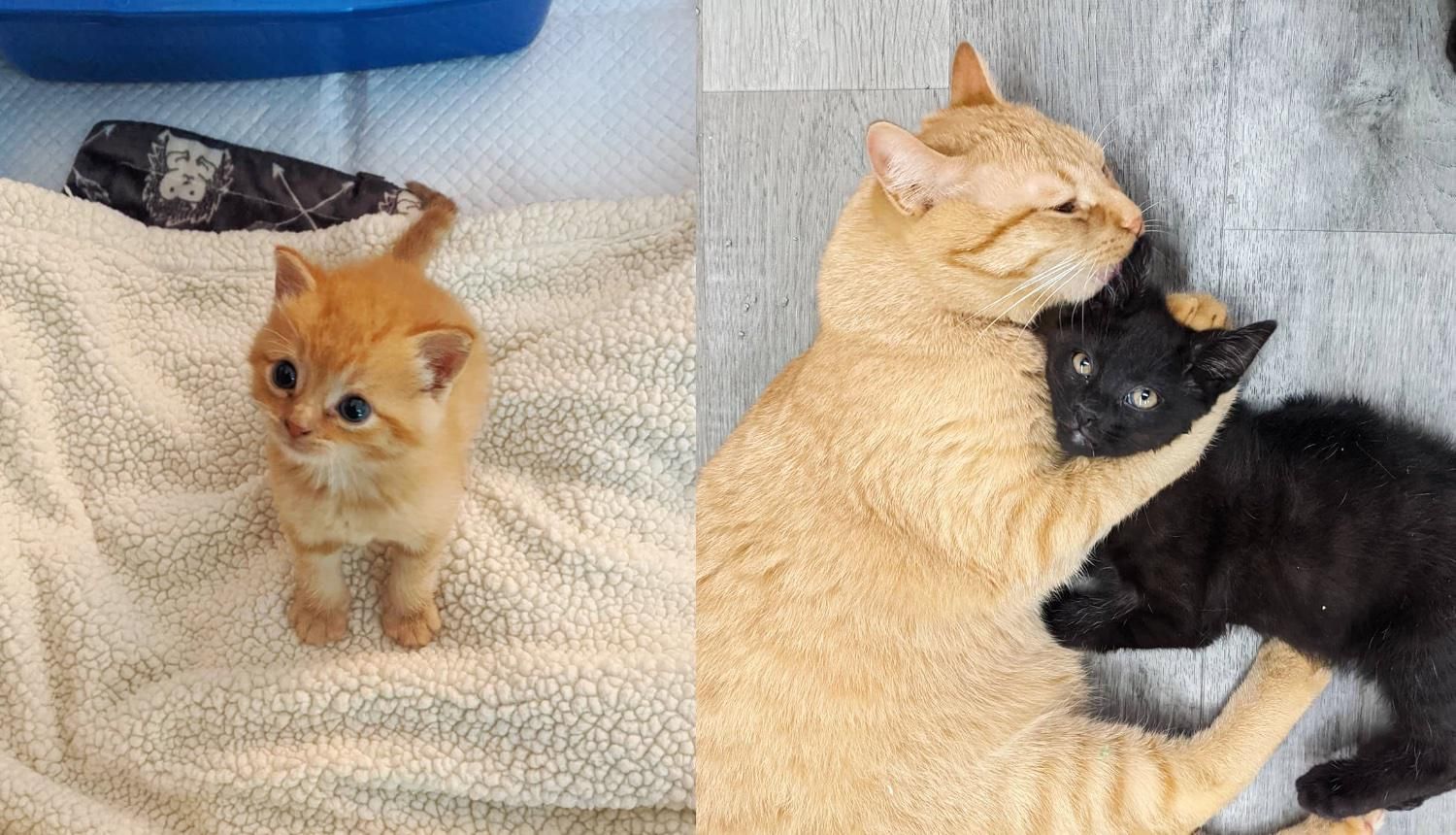 A kitten was found on the side of the road on a rainy day. He gained confidence and decided to help other cats in need.

A Good Samaritan spotted an orange tabby on the side of a dirt road on a rainy day. She stopped her car to check on the kitten, and saw him lift his head up, wanting help.

The cat mother was nowhere to be found and the kitten was all alone, hungry and wet. The finder contacted her friend, Kelsey Minier, who volunteers for IndyHumane, in hopes of getting him into foster care. “Our friend named him Jasper after a red jasper stone. We liked it, so we kept it,” Kelsey told Love Meow.

Jasper was in good condition despite having been in the rain. He quickly perked up, latched onto a bottle and showed a voracious appetite. With a comfortable abode, toys and food galore, his personality emerged.

Jasper had a favorite strawberry house and even shared it with a tiny chick. “He loved it and spent a lot of time napping in it until he could no longer fit.”

After getting a clean bill of health, Jasper cruised around the office and decided to visit the resident cats’ lavatory instead of using his own. He strutted around the house like he owned it, emanating a great deal of confidence everywhere he graced.

He befriended a little feline friend named June who was brought in as a bottle baby at just two days old. “As June grew big enough to start to walk, Jasper was learning to run.”

Jasper took her under his wing and showed her the ropes. He insisted on mentoring her how to wrestle and run while he still tried to figure out the art of play. That was his first attempt to help and supervise a kitten, and he seemed to revel in it.

Meanwhile, Penny, the resident dog, became Jasper’s favorite nanny, and Tucker, the resident cat who had never been a fan of kittens, decided to dote on him. There was this charm about Jasper that captivated everyone around him. “He got tons of kisses from Penny, and ingratiated himself into the family.”

By the time he turned eight weeks old and hit the 2-pound mark, he was ready to embark on the next chapter of his happily-ever-after.


Penny the dog was smitten with her little feline friendKelsey Minier

“We knew we were not going to be the foster moms who kept every singleton who came through our home, but one day, we found Jasper napping with our eldest resident cat, Porsche,” Kelsey told Love Meow.

Porsche enjoyed his company, and was glad to have Jasper keep the pestering, rambunctious resident cat, Tucker, occupied and entertained, so she could nap peacefully by the window.

Jasper was the missing puzzle piece to the household. “We decided to make him an official part of our family.”

The tabby boy believed that he could do anything if he put his mind to it. He didn’t have the best coordination and was prone to accidents, but nothing seemed to faze him. Soon they discovered his penchant for helping other kitties in need.


Jasper grew in size and a ton of confidenceKelsey Minier

“About six months after adoption, we fostered a young, under-socialized cat named Herbie,” Kelsey shared with Love Meow. “I decided to foster Herbie thinking that Jasper might be just the friend he needed to learn how to be a family cat.”

Jasper immediately took a liking to the scaredy kitty. He encouraged Herbie to come out of his shell and showed him that there are good humans in the world.


He helped Herbie the cat find his courageKelsey Minier

Herbie’s hisses gradually morphed into purrs as his guard came toppling down, and he began to embrace life as a spoiled indoor cat. Herbie blossomed into a cuddle-bug and has found a wonderful home since.

“As each new group of foster kittens arrived, after their quarantine period, Jasper entered the kitten room to show them how things work,” Kelsey shared.

“He showed them how to eat their wet food, kibble, play with the toys, how to clean themselves, and occasionally how to do the things he wanted them to do, thus creating the term Mr. Manager.”

Now at two years old, Jasper is a seasoned foster extraordinaire who has a ton of experience helping other kitties under his belt.


He has taken the role of Mr. Manager for all foster kittiesKelsey Minier

“He can seem bossy to kittens who don’t have confidence, but he helps them learn the ropes of being a cat. Jasper is a good cat to prepare kittens for a potential sibling in their forever home.

“He forces his confidence and managerial duties onto each kitten whether they like it or not.”

“When Jasper is not managing kittens, you will find him snoozing in one of his many cat trees, hanging out in his outdoor catio with Tucker, annoying his dog sister Penny, or nuzzling in the crook of his mom’s neck. He gives the best hugs.”

Related story: Cat Showed Up at the Door of Workplace and Asked to Be Let Inside from the Rain

A cat who waited her whole life to be indoors, is now living the dream life with her kitten. Remille the cat and Hardy the…