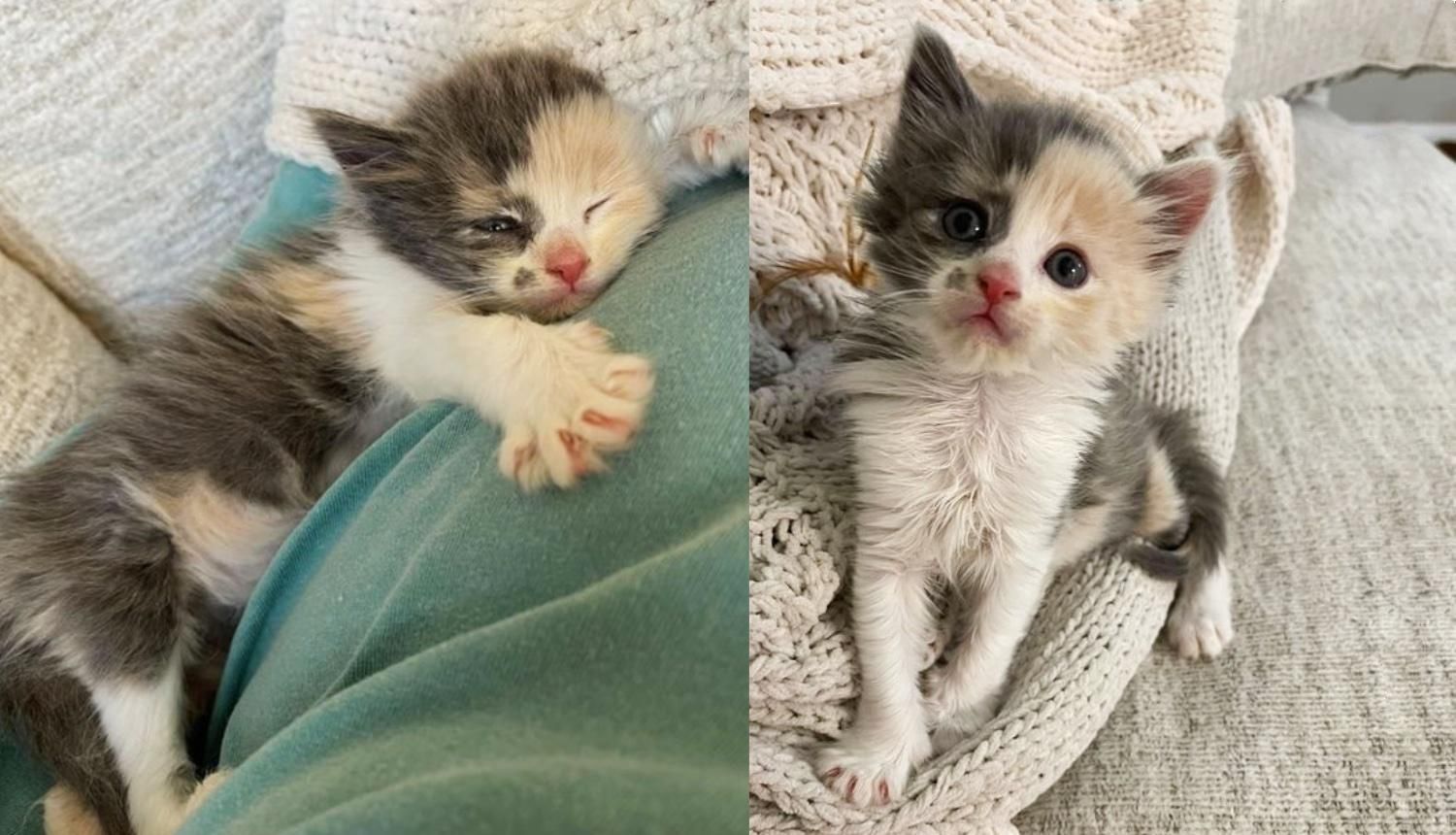 A kitten who was born outside, grew up clinging to her people, so she wouldn’t be alone again.

Uno, a diluted calico, was born outside to a feral cat. She was separated from her mother too early and found herself neglected and in need of rescue. Marlena, the founder of Be Their Voice Animal Rescue (in Atlanta, GA), learned about her plight and sprang into action.

“I picked her up that night. She was around five weeks old based on her teeth and physical features. She only weighted 0.8 pounds, where she should’ve weighed 1.25 pounds,” Marlena shared with Love Meow.

The kitten was just skin and bones, covered in dirt, and very hungry.

“We rushed straight to the closest of our rescue homes for supplies to feed her. She suckled on my friend’s hand the whole way there.”

The little ball of fur inhaled 30 ounces of kitten formula within the first 20 minutes of being rescued. They continued to bottle-feed her every four hours and quickly learned how much she yearned for a constant friend.

Uno would scream at the top of her lungs when she was left alone for a brief moment. The second her people returned, she tried to climb up their legs with her micro claws and even attempted to make her way onto their shoulders.

Despite being so tiny, she was equipped with a set of pipes and a strong purr motor.

Nursing kittens have the best chance of surviving and thriving when they are with their cat mother. “There are certain times when intervention is appropriate–if they are injured or visibly ill.”

Fortunately, a Good Samaritan was aware of the situation Uno was in, and sought help for her.

Uno decided to ignore all the cat beds and instead, she would sleep on her people’s shoulders, chest, or in their arms.

The sweet calico would suckle on her foster mom’s ears or face, and cling to her after every meal. She was able to sleep easy knowing that she was loved.

Uno followed her people everywhere they went, asking to be picked up and cradled like a baby.

She would melt and fall fast asleep when being held. She was a clinger and an attention seeker, and just wanted to be tended to at all times.

Over the next few weeks, she learned to eat from a dish like a big kitty. Once her stomach issues were resolved, she began absorbing nutrients and growing in leaps and bounds.

Not only did she catch up in size, but her energy level soared.

Uno figured out how to wrestle with toys that were twice her size. She’d tackle them with such ferocity and hop around the room like she had springs under her feet.

She was confident, brave and adventurous, and never backed down on any challenges thrown at her.

Uno went on to socialize with other foster kittens to help knock out her single-kitten syndrome. When she met Tess the tabby, they immediately hit it off, as if they had always been littermates.

Uno learned about boundaries and relished every snuggle-puddle moment with her fur friends. She was especially attached to Tess and the two formed an adorable bond.

When it came time for adoption, the duo found their forever home together. A few weeks later, they welcomed a third kitten, Bessie (from the same rescue), into their crew.

Uno’s forever mom shared that she ‘is a princess and is always the first to eat, and the others just let her. She used to be the one following the others around, and now she is a leader. She still likes to suckle but we give her a blankie now.”


Uno is all grown upBe Their Voice Animal Rescue

“Since day one, she has been a sassy, strong survivor. Her will to live is unmatched and incredible to experience. I am so grateful I had the opportunity to rescue her,” Marlena told Love Meow.

Related story: Couple Find One Kitten Waiting on the Side of the Road, They Can’t Leave Him Behind

A cat had two kittens indoors for the first time after years wandering outside. Anika the cat and her kittens Albus and ArlowChatons Orphelins Montreal…

A cat who was walking around lost, found a kind person to let her in, so her kittens could have a better life. Willow the…

A feral cat warmed up to her rescuer when she realized her kittens were in good hands. Ricky the cat and her kittensSalty Animal Rescue…