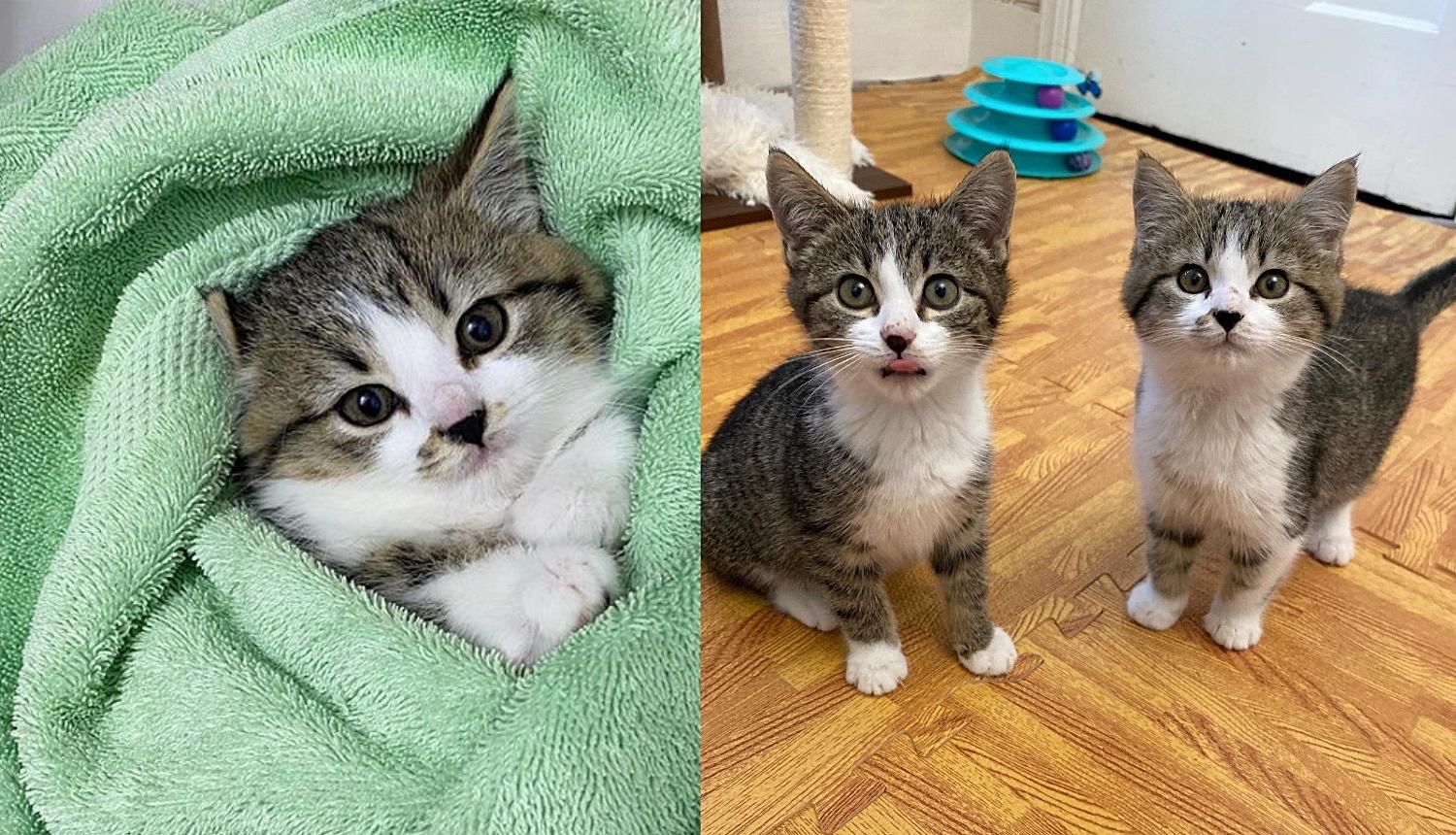 Two feral kittens completely changed from hissing and hiding in a corner to purring nonstop.

Kimchi and Wasabi, two tabby kittens, were born to a feral cat and later brought into Animal Welfare League of Arlington for a chance at a better life.

They were terrified of people as they hadn’t had much human contact. Asa, a foster volunteer, took them on to provide a comfortable environment and socialization they desperately needed.

“When I first got them, they would both hide from me any time they saw me. Wasabi would let me know in more obvious ways by hissing, spitting and swatting,” Asa shared with Love Meow.

“After letting them decompress the first day, I started working on socializing them from day two.”

Asa spent ample time with the kittens in their room, helping them acclimate to being around people. She would watch movies on her laptop and talk to them at the same time, so the duo could get used to sound and activity.

“I’d accompany them for mealtimes, so they’d start thinking of me as their food source, and of course, lots of treats for bonus points.”

A few days later, Kimchi, the braver of the two, mustered up her courage to accept treats from Asa’s hand. Slowly but surely, her walls began to fall down. When she allowed Asa to pet her, she switched on her purr motor for the first time.


Kimchi began to warm up to her foster momAsa @shibuyarollcall

“She was comfortable enough to climb into my lap and lay down.”

Her sister Wasabi, on the other hand, kept her guard up and refused to give in. She would hide behind Kimchi as her shield and depend on her for everything.

Wasabi began many one-on-one sessions with Asa, where she was wrapped and cuddled in a soft towel. With a lot of coaxing and “purrito” time, she slowly came to realize that her human wasn’t so bad.

Watch Kimchi and Wasabi in this cute video:

“It took a lot of time and patience but we’ve finally had a breakthrough,” Asa told Love Meow.

Three weeks into foster care, Wasabi discovered her purr and started to let her foster mom pet her. As they rang in the New Year, Wasabi turned into quite the purr machine with Asa.

Wasabi came down from the cat tree to greet her foster mom one morning. She was no longer hissy and afraid, but rubbed against Asa for the first time.


Wasabi decided to trust one day. She approached Asa for attention and rubsAsa @shibuyarollcall

“I’m still in disbelief over her (seemingly overnight) transformation. We’re definitely headed in the right direction.”

Now, Wasabi will come up to greet Asa whenever she stops by their room. “It’s a huge change and so heartwarming seeing her hang out in plain sight instead of finding a corner to hide in.”

Kimchi the silent-meow extraordinaire has befriended other residents (cats and dogs) and Asa’s husband. She gets along with them all swimmingly.

“She has the cutest large eyes, and reminds me of a slow loris. She now follows me around the house, cuddles with me as I work, and hangs out in the living room with me.”

“Wasabi is still shy and hissy with other residents but has become such a sweetheart with me. Hopefully with just a little bit more time, she’ll be as comfortable as Kimchi.”

Share this story with your friends. More on Kimchi and Wasabi and Asa’s fosters on Instagram @shibuyarollcall.

Related story: Kittens from the Street Grow to Adore Sweet Dog and Think He is Their ‘Mother’

Two kittens helped each other learn to trust. They went on to befriend a wobbly bunny. Kumar the bunny and Kimchi the kitten@shibuyarollcall When Asa,…

A pair of kittens decided to trust after being rescued. They even accepted a lone kitten from the street. Cinnamon and NutmegLaila @rescueforwinston Two very…

A cat came to a balcony and decided to begin a new life. He turned out to be the cutest “supervisor”. Luckyou the cat@comrescuemontreal A…