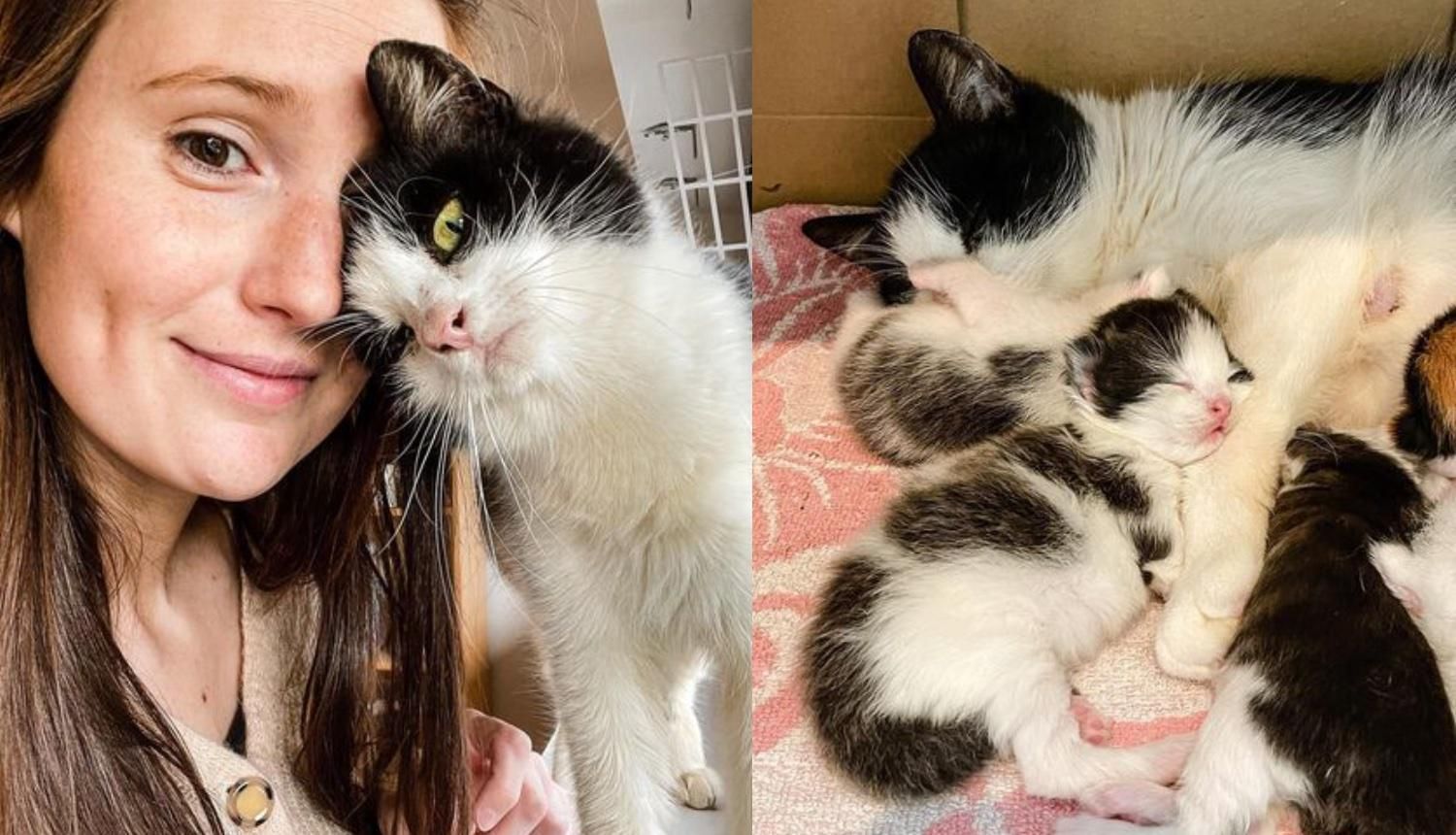 A cat “thanked” the woman who opened the door for her kittens after she’d lived outside all her life.

Anne, a foster volunteer of Kat Zoekt Thuis (Cat Looking for Home), an animal rescue in Belgium, was informed about a shy cat that appeared one day in a cat colony.

The feeder (carer) of the cat colony noticed that the newcomer was not feral despite being very timid, and that she was hungry and clearly pregnant. The cat had been scrounging around for food and a safe haven for her babies.

“After a week of gaining her trust, the feeder was able to pick her up, put her in a carrier and dropped her off at my place,” Anne shared with Love Meow.

The black and white cat, named Iluna, was very frightened when she first arrived at her foster home. She came under a lot of stress after all the changes. Anne gave her a quiet, comfortable space to decompress, and all the time she needed to relax.

“She was used to people, but being indoors definitely was new to her. We assume she used to be a barn cat and was probably abandoned when they noticed she was pregnant,” Anne shared. “She was in rough shape, very skinny, covered in dirt and had scratches all over her nose.”

Anne cleaned her eyes and nose, treated her for an infection and reassured her that she was safe. Once Iluna realized the indoor life wasn’t so scary, she began to allow Anne to pet her and even switched on her purr motor for the first time.

“She was uncomfortable and cautious until she discovered the big window, where she could look outside. I think that was the moment she realized she was safe. She spent the entire first week (hanging out) on the window sill,” Anne shared with Love Meow.

Anne placed the litter box on a platform to encourage Iluna to use it, as everything higher up seemed to be preferred. Slowly but surely, Iluna started to show affection toward her foster mom. She walked up to Anne one day and decided to greet her with a head bump to her face, as if to thank her for letting her stay.

“She loved it when I rubbed her pregnant belly. At first, she would only eat if I was petting her. And after a few days she started eating on her own.”

When Iluna went into labor two weeks into foster care, she was grateful to have a comfy nest and a loving human to keep her company. “The delivery went very smoothly. She allowed me to sit next to her during labor.”

“Iluna is one of the best cat moms I have ever fostered. She is very attentive and caring. A lot of new moms are a bit clumsy and sometimes lay on top of their babies. This never happens with Iluna,” Anne told Love Meow.

Watch Iluna and her kittens in this cute video:


Iluna the cat and kittens

“She’s so gentle with them and is always aware of where they are. If a kitten wanders off, she’s after them in no time.” With her painstaking care and unconditional love, the kittens are nursing well and growing by leaps and bounds.


She gave birth to a litter of healthy kittensAnne @fosterkittens_be

“She’s also very protective of her babies! I can sit next to them and watch them, but I cannot touch them. That makes it a bit harder for me to check on the kittens, but luckily, Iluna does most of the work.”

In the weeks that follow, the kittens will start learning to find their feet and play. Once they are big enough and weaned, Iluna will be able to take a back seat and spend more time with her people, doing what she loves.

Iluna will never have to fend for herself in the outdoors again. Once she is done with mommy duties, she will be spayed and find a wonderful family to spend the rest of her life with.

Related story: Kitten Found in a Field Cuddles Young Man and Insists On Staying with Him

A cat got some help from a canine buddy to raise her seven tuxedo kittens while she learned to trust. Banksy the cat momSalty Animal…

A cat who was found with three kittens under a balcony, decided to come out from hiding one day and learn to trust. Madison the…

A 10-year-old cat got up on her hind paws and waved to get people to notice her. Vali the catCommunity Cat Club Early this year,…