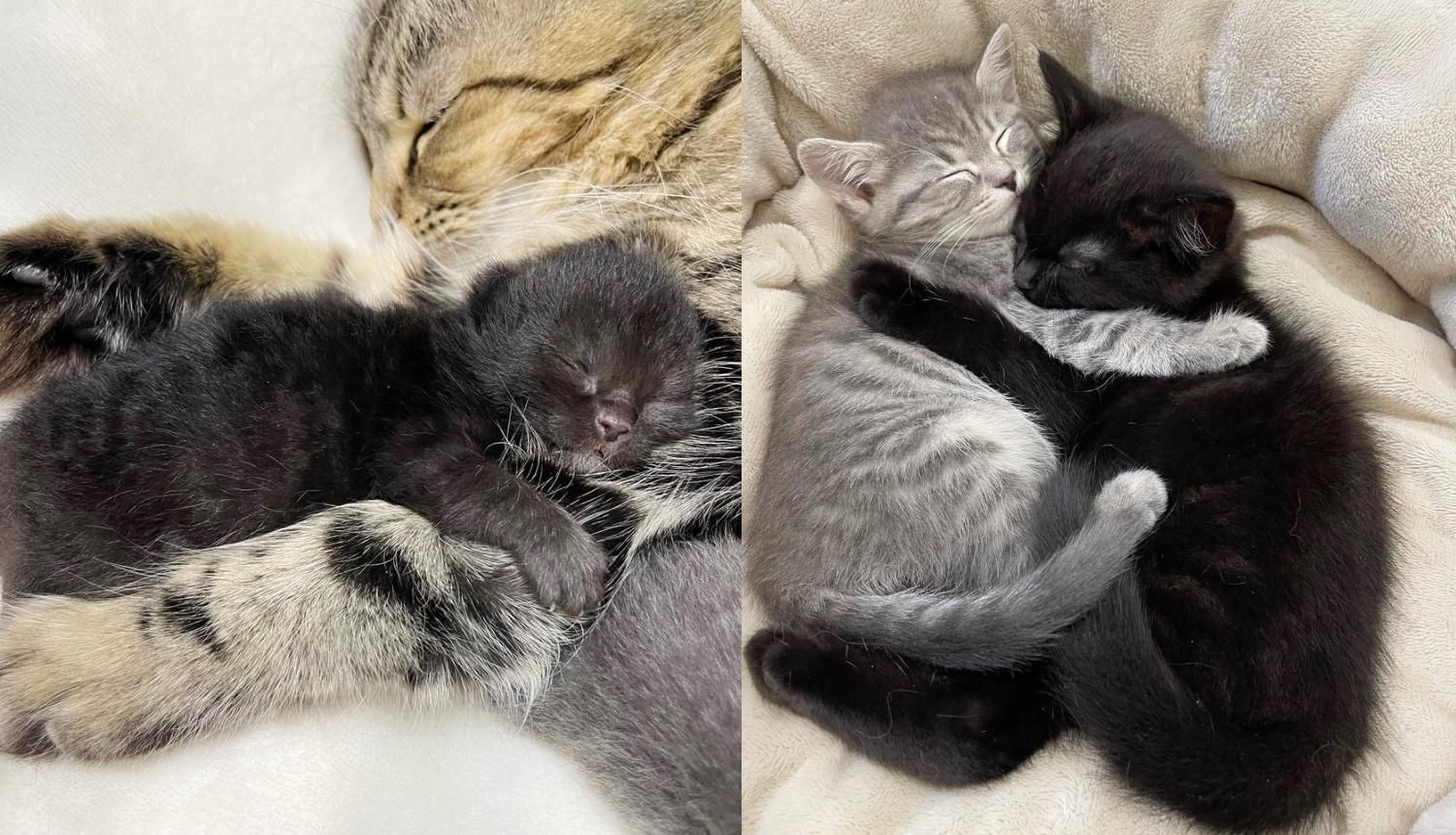 A cat made sure that her kittens would have a purr filled life after she was found roaming outside.

A fluffy cat named Tails was left behind to roam the streets and fend for herself without food and shelter when her previous owners moved away.

A Good Samaritan learned about her plight and made it her mission to save her. Tails accepted her help right away with purrs and gratitude, and was transported to Best Friends Felines (in Brisbane, AU) for a chance at a better life.

At the vet, they discovered that she was pregnant and ready to give birth within the next couple of weeks.

Tails quickly settled into foster care and reveled in the warmth and comfort of her new abode. She was so happy soaking up sun beams by the window while anticipating her kittens’ arrival.

She went on to deliver a litter of three within the confines of her nursery, and was completely devoted to her kittens’ every whim. The runt of the litter sadly didn’t make it but her siblings started to thrive.

Her kittens, Jett and Gracie, made good gains each day and their bond started to form. When their eyes were wide open and ears perked up, they began to follow noises and look up at their foster carers with big bright eyes.

As soon as they got pep under their feet, they took a few wobbly first steps while their mama watched from the sideline.


Tails was protective of her babies@bestfriendsfelines

“Jett and Gracie started walking confidently, which means Tails spent several days trying to prevent her kittens from wandering off and regularly returning them back to the nest,” the rescue shared.

Gracie, the fearless one, was always the first to venture out, and Jett would tag right along. “Jett would gladly follow his little sister once she had braved the big wide room and tested out if the route was clear.”


Jett and Gracie are a bonded pair@bestfriendsfelines

Slowly but surely, Mama Tails let her kittens come out for little excursions as long as they didn’t meander too far into the room. She opted for resting on top of the nesting box to keep an eye on their little escapades.

At five weeks old, the family of three moved into their upgraded kitty suite, where there was plenty of space for the kittens to romp around in.

Tails taught them how to eat from a dish and use the litter box like a big kitty. She began to give them more independence and spend more me-time with her people.

“The kittens were becoming super curious about everything that moved. Tails enjoyed the well-earned breaks while the kittens were off climbing the cat tower and discovering the joys of playing.”

The dynamic duo do everything together and feed off each other’ energy. When they were given access to the whole house, they zoomed around the place like they owned it.

The two siblings are never far from each other.

Tails has since retired from motherhood and is playing like a kitten again. Gracie and Jett have found their forever home together, and are spoiled and adored by their loving family.

After being left outside homeless, Tails found a second chance and raised her babies into the happiest young cats. She melts every heart that she comes across with her sweet personality and bountiful affection.

Jett and Gracie are living the dream life at their forever home. Tails is now ready to find a place of her own, where she will be the center of attention.


Jett and Gracie at their forever home@bestfriendsfelines

A kitten who runs around without sight, has found a cat to look out for him as his new mother. Amigo the kittenBest Friends Felines…

A cat came to a shelter and stunned everyone with a kitten. Their bond grew tighter each day. Cupid the cat and her only kitten…

A cat blossomed remarkably after she was rescued at 22 years old. Now, she chases the sun and hogs the bed. BestFriendsFelines At 22 years…