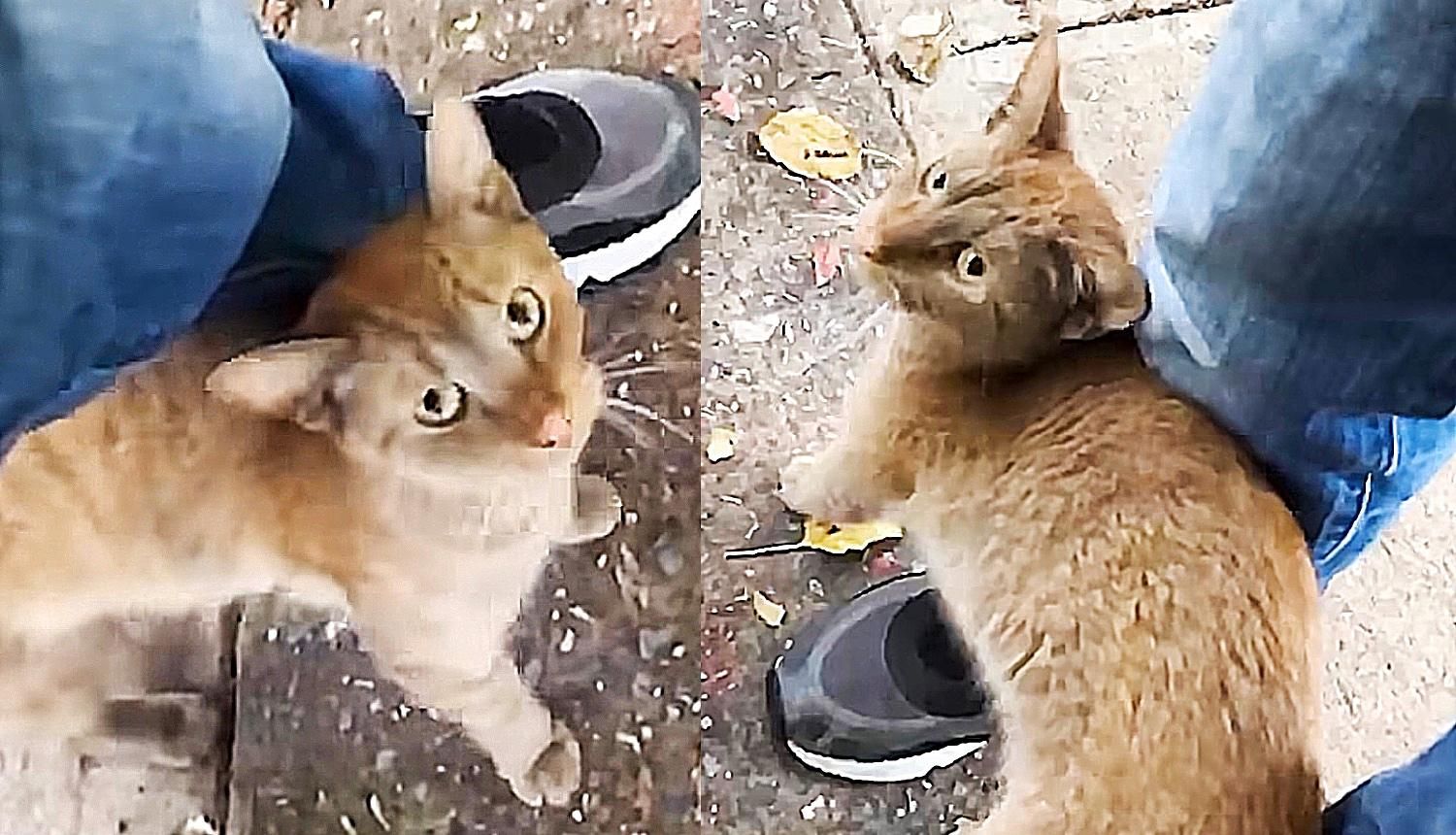 A cat came to a parking lot and asked for help. She walked right into a carrier one day.

A few weeks ago, an orange cat showed up in a parking lot at a local police precinct in the Bronx, NY. Daniel who works at the precinct, spotted the friendly stray and offered some food and water.

The cat was so thankful that she rubbed up against his legs and meowed at him, vying for his attention. Daniel knew that the cat didn’t belong on the streets, so he reached out to the rescue community for assistance.

Suzy, an animal rescuer, was contacted and stepped up to the plate. As the cold weather approached, she knew she had to bring the cat to safety soon.

“I drove to get this cat. she was beyond emaciated, and her ribs were jutting out, but she was so friendly,” Suzy shared with Love Meow.

Shortly after Suzy arrived in the area, the orange stray appeared and immediately sauntered up to her for some pets. The cat was so pleased to have some canned food in her belly and meowed back with gratitude.


She came right up to Suzy shortly after she arrivedSuzy @savingbelladonna

The sweet tabby eventually made her way into the carrier that Suzy had brought along, as if she was ready to leave the outdoors once and for all. “It was the easiest rescue ever.”

The cat whom they named Flamingo, was just skin and bones and covered in filth, but she didn’t lack an ounce of affection.

Flamingo purred up a storm as she was given a full plate of food and a comfortable space to stay.

She was starved of love and curled up against her rescuer for some much-needed TLC. All she wanted was someone to dote on her.


She is so happy to be an indoor catSuzy @savingbelladonna

“That was her three minutes after coming out of her carrier. She literally just started rubbing on us and falling on our feet. She is the sweetest thing on earth,” Suzy told Love Meow.

Knowing that the cat needed a foster home, Little Wanderers NYC, a local animal rescue, didn’t hesitate to take her under their wing.

They arranged for a foster family and provided supplies and medical care to help Flamingo get back to tiptop shape.


She has a lot of fattening up to doSuzy @savingbelladonna

After roaming the streets for most of her life, Flamingo is thriving as an indoor cat. She will never have to spend another day outside, and is already filling her room with constant purrs.

She is so content to have a blanket to knead on and humans to snuggle with, on demand.

Suzy was able to get the sweet cat off the streets before the bitter cold hit the area. She can breathe a sigh of relief knowing Flamingo is safe, as she continues to save other cats from the streets of the Bronx.

The smart tabby sought help from the right person that day, and now she is living the VIP life she so deserves.

Share this story with your friends. More on Flamingo the cat and Suzy’s rescues on Instagram @savingbelladonna and Little Wanderers NYC @littlewanderersnyc.

Related story: Cat is Overjoyed to Be Reunited with Kittens in a Comfy House After Being Left Outside in a Box

A stray cat tried to push his way into a home and ended up changing his life. Fuller the catSparkle Cat Rescue In early November,…

A 22-year-old cat is so happy to be out of the shelter, and have a full belly and a comfy place to spend her golden…